There are two main parts of your mighty immune system:

This is your rapid response system.  It patrols your body and is the first to respond when it finds an invader. The innate immune system is inherited and is active from the moment you are born. When this system recognizes an invader, it goes into action immediately. The cells of this immune system surround and engulf the invader. The invader is killed inside your mighty immune system cells. These cells are called phagocytes. 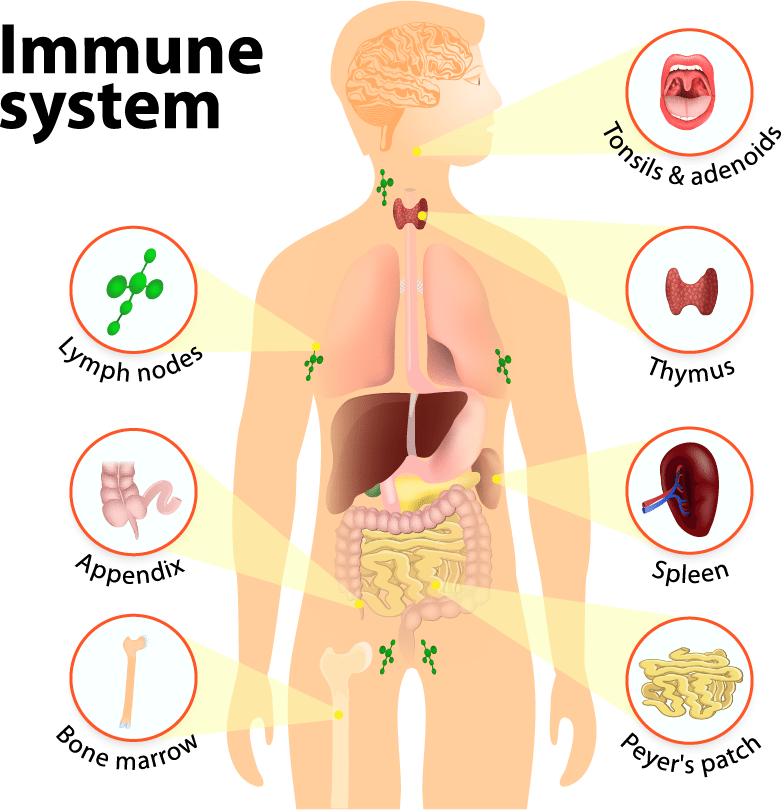 Many tissues and cells contribute to a healthy immune system.  The tonsils and the thymus: These are responsible for producing antibodies, against foreign invaders in the body.
Lymphatic system: Made up of lymph nodes and vessels, this is a network that carries lymph fluid, nutrients and waste material between the body’s tissues and the bloodstream.
Bone marrow: This is the soft tissue found primarily inside the long bones of the arms, legs, vertebrae and the pelvic bones in the body. It’s made of red marrow, which produces red and white blood cells along with platelets and yellow marrow. Spleen: The spleen filters the blood by removing old or damaged cells or platelets. It also helps the immune system by destroying bacteria and other invaders.  White blood cells: Made in the bone marrow, these cells protect your body from infection. If an infection develops, white blood cells attack and destroy the organism causing it, whether it’s bacteria, a virus or another organism.
Find out how to power your immune system here.
Read more here.